Around this time last year, many retail crypto investors subscribed to the economic theory that cryptocurrency hard forks — the ones that result in irreversible network splits and create new blockchains — were a net positive for their portfolios. “How could they not be?” they asked. “It’s free money!”

Indeed, at that point, the two most prominent cryptocurrency hard forks — Ethereum Classic and Bitcoin Cash — had each proven to be a boon to investors who held on to the coins on both sides of the split. However, both of those forks occurred either shortly before or amidst a historic crypto market rally that masked weak fundamentals in a variety of projects. Absent the sort of black swan event that the cryptocurrency market experienced last year, it seems that when it comes to truly contentious hard forks, the whole may be less than the sum of its parts.

As evidence, one need look no farther than Bitcoin Cash (BCH), which is itself now reeling in the wake of a contentious hard fork that took place in the throes of a prolonged bear market rather than a retail-driven market upswing.

Before the fork, the bitcoin cash price was trading near $500 with an ~$8 billion market cap that ranked fourth among cryptocurrencies. In the month since, BCH has declined to just $82 on Coinbase, representing a more than 80 percent decline. If one subscribes to the “Bitcoin Cash is Bitcoin” philosophy, then the bitcoin price is trading at its lowest price since early 2013. Even if you don’t, bitcoin cash has still fallen 98 percent from its all-time high and now sits at a record low. 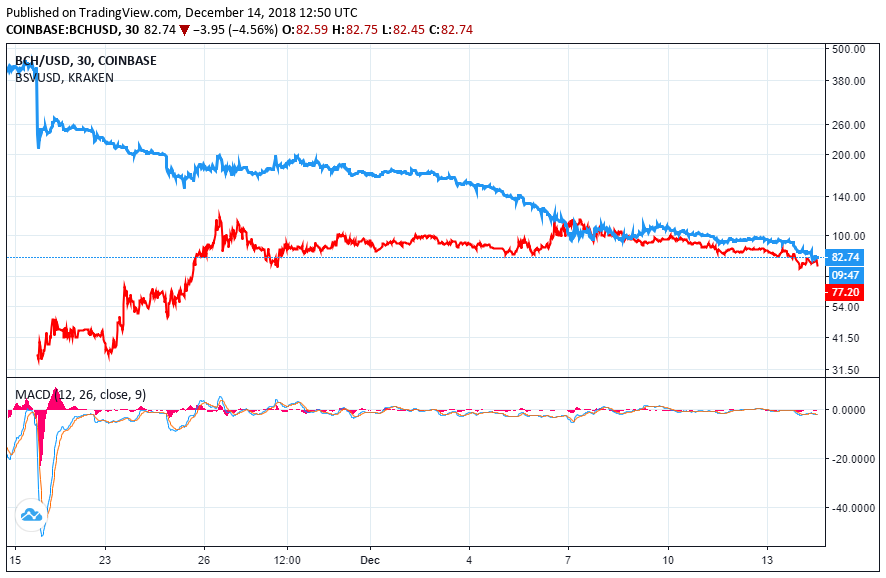 Part of that lost economic value did not exit the Bitcoin Cash ecosystem completely but rather migrated to a separate BCH-derived crypto network.

Following the fork, that new cryptocurrency — Bitcoin SV (BSV) — was created, and despite some early struggles its coin price managed to catch up to BCH. At one point, bitcoin sv even surpassed BCH in total market capitalization, though it quickly slunk back below its older sibling and more or less faced a similar plight in the days hence. As of the time of writing, BSV was priced at $77 on Kraken, roughly $5.50 below BCH.

However, the drop cannot merely be attributed to the general market decline, as the combined value of BCH and BSV has also plunged against market bellwether bitcoin (BTC). Prior to the fork, BCH was already trading near an all-time low at approximately 0.08 BTC. Now, bitcoin cash and bitcoin sv are worth a combined 0.048 BTC, and that number shows no signs of finding a bottom anytime soon. 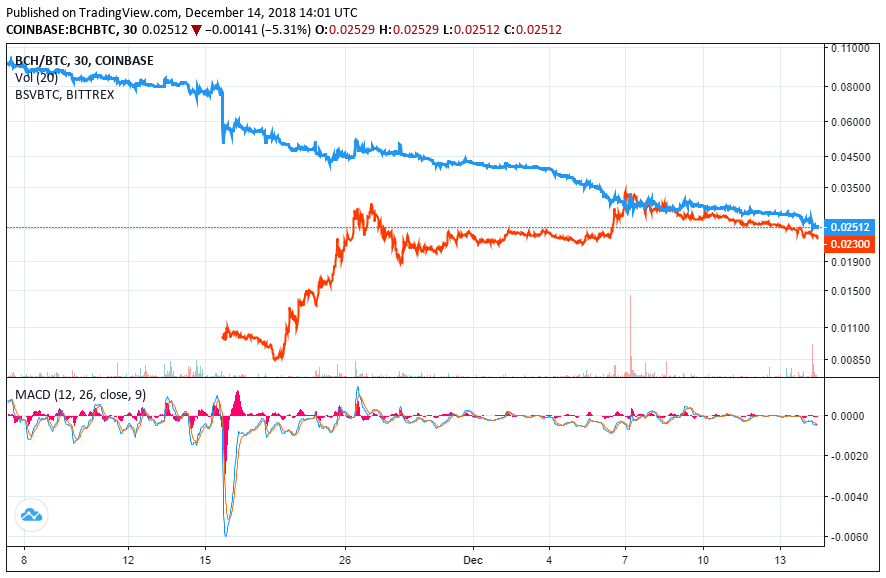 It’s unclear what the future holds for bitcoin cash, bitcoin sv, and the crypto sector at large. However, at least right now, it seems that traders are not confident that both BCH and BSV can thrive over the long-term. Until the market can definitively sort out which of the chains is the true economic heir to the pre-fork BCH, both of them may be fated to play increasingly smaller roles in the crypto marketplace.