$1 Billion in Crypto Stolen by Just 2 Groups: How Do They Cash Out?

A report from Chainalysis, a blockchain analytics firm based in the U.S. and Denmark, has revealed that just two groups have stolen more than $1 billion worth of crypto in the past several years.

Based on the transactions and addresses traced by the firm, the hackers obtained around $90 million per hack on average, running a lucrative criminal operation spanning out many major crypto markets.

HOW ARE STOLEN FUNDS CASHED OUT?

Although it is possible to track most transactions on major public blockchain networks such as Bitcoin and Ethereum, criminal groups utilize various methods to tangle transactions and their origins.

Earlier this month, when a New Zealand-based crypto exchange Cryptopia was hacked, Binance was able to immediately freeze the stolen user funds.

Just checked, we were able to freeze some of the funds. I don't understand why the hackers keep sending to Binance. Social media will be pretty fast to report it, and we will freeze it. It's a high risk maneuver for them. https://t.co/i0PeahLzic

However, for well maintained criminal organizations like the two groups Chainalysis examined in its recent research, it is difficult to trace suspicious transactions if they come from hackers that are patient and sophisticated in confining data.

The two groups mentioned in the report of Chainalysis, named Alpha and Beta, are said to wait on average 112 days to convert and launder their funds to ensure that the authorities cannot trace the transactions.

Beta, for instance, waited for nearly two years on one occasion to withdraw funds stolen in a hacking attack to eliminate evidence that could be used to tie the organization to the transaction.

The hackers typically move stolen funds through a complex array of wallets and exchanges in an attempt to disguise the funds’ criminal origins. The hackers then often observe a quiet period of 40 or more days in which they don’t move funds, waiting until interest in the theft has died down. Once they feel safe, they move quickly. 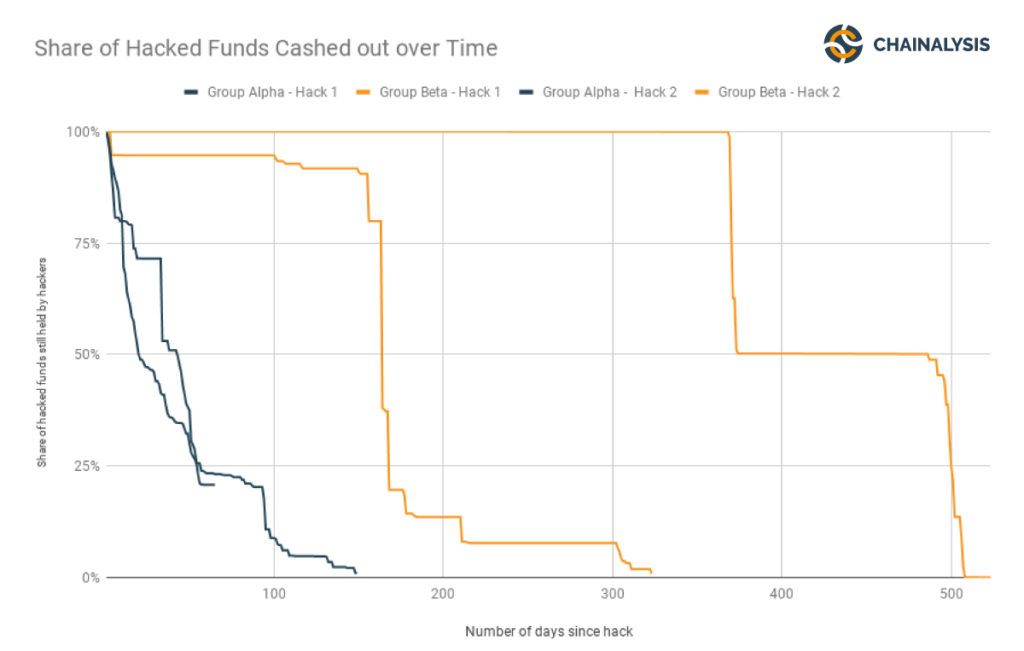 Speaking to The Wall Street Journal, Chainalysis chief economist Philip Gradwell said that it is challenging even for major crypto exchanges with strict Know Your Customer (KYC) and Anti-Money Laundering (AML) policies in place to crack down on stolen funds hitting exchanges.

Primarily due to the improvement in methods employed by hackers in disguising transactions, the researchers at Chainalysis emphasized that the only way to stop suspicious transactions from going through is for exchanges to cooperate with each other.

CRYPTO EXCHANGES IN SOUTH KOREA ARE FORMING AN ASSOCIATION

This week, Bithumb, UPbit, Korbit, and Coinone, four of the largest crypto exchanges in South Korea, formed an association to crack down on money laundering using cryptocurrencies.

The four exchanges said in a statement obtained by Hani, a mainstream media outlet in South Korea, that cooperation between exchanges, banks, and authorities will increase the efficiency of KYC and AML initiatives.

“The cooperation between exchanges will improve the efficiency of anti-money laundering policies. If exchanges work together in obtaining identities of customers through a strict know-your-customer  system and monitoring transactions, it will prevent money laundering using cryptocurrencies and create a safer environment for cryptocurrency trading,” the exchanges said in a statement translated by CCN.

If the general trend of the cryptocurrency exchange market moves toward increasing cooperation amongst exchanges, it could prevent money laundering in crypto markets at a large capacity, disincentivizing hackers from targeting trading platforms.